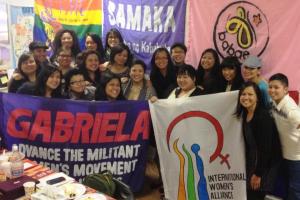 The national council’s participation in the March 8th women’s day activities in San Francisco signified national unity and also international coordination as working women during the action and solidarity night donned armbands with the logo of the International Women’s Alliance (IWA) in which GABRIELA USA is a founding member.

The national council meeting began with the current context of the political and economic crisis globally and in the Philippines. The current slaying of Cristina Morales Jose, a community leader in Mindanao who led typhoon relief efforts in the past disaster, proved a culture of impunity continues in the Philippines that affect women organizers. GABRIELA USA affirmed their commitment to condemning the heinous human rights violations under the Ninoy Aquino regime. Further, the study of “Aquinomics” in the current administration confirmed that strategies of neoliberal globalization are driving more and more Filipino people into poverty, a majority of them women and children.

“The need for Filipino women’s organizations to unite with one another is increasingly necessary as the economic crisis continues to push our mothers, daughters and sisters out of the Philippines,” stated Valerie Francisco, Chairperson of GABRIELA USA, “Our work is to not only provide services to help our sisters here in the US, but to organize our communities to combat US imperialism right here.”

The national council of GABRIELA USA also adopted a new campaign to organize and support Filipino migrant women (FMW) in their issues as workers. Caregivers in Northern and Southern California, airport workers and hotel workers in Seattle, trafficked workers in New York and teachers in Washington DC are some of the migrant communities GABRIELA USA member organizations have worked with in the past years. Currently, GABRIELA USA is endorsing major migrant worker campaigns such as the Justice for Grand Isley Shipyard (GIS) Filipino Workers, the Stop Trafficking Our People (STOP) and the Pass AB 241, California Domestic Workers Bill of Rights campaign. On May 1st, 2013, GABRIELA USA will formally launch a campaign to continue to advocate and organize with Filipino migrant women in the US.