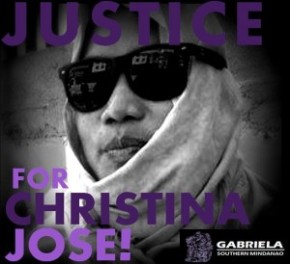 “We condemn the persistence of extrajudicial killings in the Philippines which claimed Jose as latest victim. The circumstances surrounding her murder is suggestive of the ways gunmen kill citizens who have been branded as enemies of the state for criticizing corrupt, unjust and inhumane government programs and policies. We reiterate our condemnation of the government’s counter-insurgency program Oplan Bayanihan which has made extrajudicial killings and other human rights violations against Filipino women, children and men a despicable pattern under the Aquino administration.”

Jose, the slain woman leader, was also kagawad of Bgy. Binondo in Baganga town. She earlier exposed the food blockade and militarization of relief operations conducted by 67th Infantry Battalion of the Philippine Army.

Barug Katawhan, an organization of survivors of the typhoon Pablo disaster, figured in national news when more than 4,000 members of the organization came all the way from typhoon devastated areas of Compostela Valley and Davao Oriental to Davao City to stage a barricade in front of the regional office of the Department of Social Welfare and Development (DSWD) in February 25-27. They confiscated sacks of rice and boxes of noodles as they protested DSWD Sec. Dinky Soliman’s apparent hoarding of 10,000 sacks of rice to typhoon survivors that she promised to the group in January.