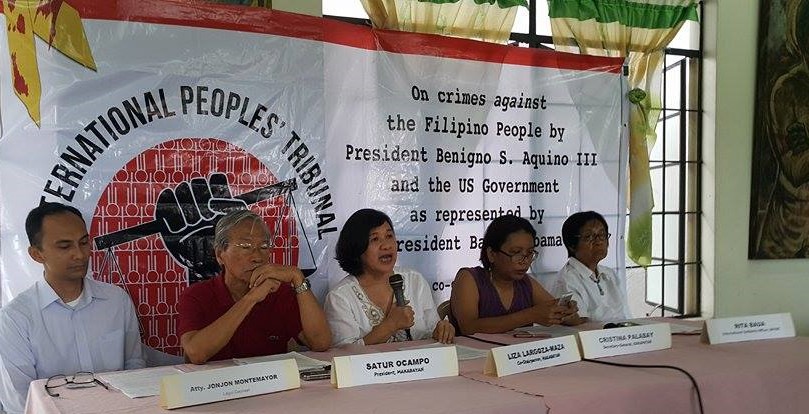 INTERNATIONAL ALLIANCE DEFENDS CHAIRPERSON AGAINST POLITICAL HARASSMENT, INTIMIDATION, VIOLATION OF RIGHT TO LIBERTY OF MOVEMENT AND FREEDOM OF ASSOCIATION.

In a display of supremacy and control in Asia Pacific, the US government has once again brandished its so-called enhanced cooperation in the region.

The International Women’s Alliance (IWA), a global alliance of grassroots women’s organizations, institutions, alliances, networks and individuals committed to advancing women’s liberation denounces the threat and harassment and the violation of the right to movement, liberty, and freedom of association against its Chairperson Liza Maza by the US Department of Homeland Security through the Korean Air officials.

Maza, a vocal anti-US imperialist, a Philippine nationalist has issued critique after critique of US policies and programs including the Mutual Defense Treaty, the US military bases, the unequal Visiting Forces Agreement (VFA) and recently, the increased US military presence and intervention in the Philippines through the newly signed US-PH Enhanced Defense Cooperation Agreement (EDCA).   Maza was scheduled to depart to the US  aboard  Korean Air 622 to serve as an expert witness at the International People’s Tribunal on the Crimes of the Obama-Aquino regimes.  She was supposed to testify against the gross violations of Philippine sovereignty and of the Filipino people’s rights under the EDCA and the VFA.  She was not able to leave after the  Korean Airlines, through a ground staff, barred her from boarding the plane while she was on her way to Gate 5 of the Ninoy Aquino International Airport Terminal 1 at about 11:15am.  This is clearly political.

Maza sought the assistance of  Atty. Edre Olalia of the National Union of People’s Lawyers who also talked to the ground staff and the Philippine immigration officer on duty at the desk to know why Maza was prevented from boarding the plane.  Maza heard the immigration officer telling the airline staff her travel papers are in order and thus allowed to travel then she advised  the airline staff to submit a letter to her saying that they did not allow Maza to board the plane.

“The US authorities must have flagged me during the trip of the 30-women delegation of “Women Cross DMZ”, renowned women peace activists who crossed the demilitarized zone (DMZ) bordering North and South Korea last May 24, 2015, where  I read the women’s Declaration of Unity together with Gloria Steinem and two Nobel Peace laureates at a public rally in North Korea and also spoke on women’s organizing for peace in the Philippines at the Peace Symposium in South Korea. The  “Women Cross DMZ” was later reported and published by the CNN and the New York Times among others”,  Maza said.

“I am outraged that  I have been held at the airport of my own country, barred from boarding a South Korean Airlines at the order of US Department of Homeland Security  miles away from the US territory,” Maza lamented.

The ground staff confirmed that they received an email from the Customs Border Protection of the US Homeland Security saying Maza should not board the plane.   Maza waited at the desk of a Bureau of Immigration officer after requesting for a copy of the e-mail.  Airline supervisor, Mr. Luigi Luis Santos, later came down and confirmed that they received an email that same morning and informed Maza that the e-mail is  “not for dissemination to a 3rd party”.

“As the US ‘rebalances and pivots’ to Asia and heightens militarization of the Asia-Pacific region, the world, we must continue to be vigilant, to expose and oppose this  aggression, or  the next thing you know, your rights and freedom is held hostage  by the US as they did to me and many others”  Maza ended.###