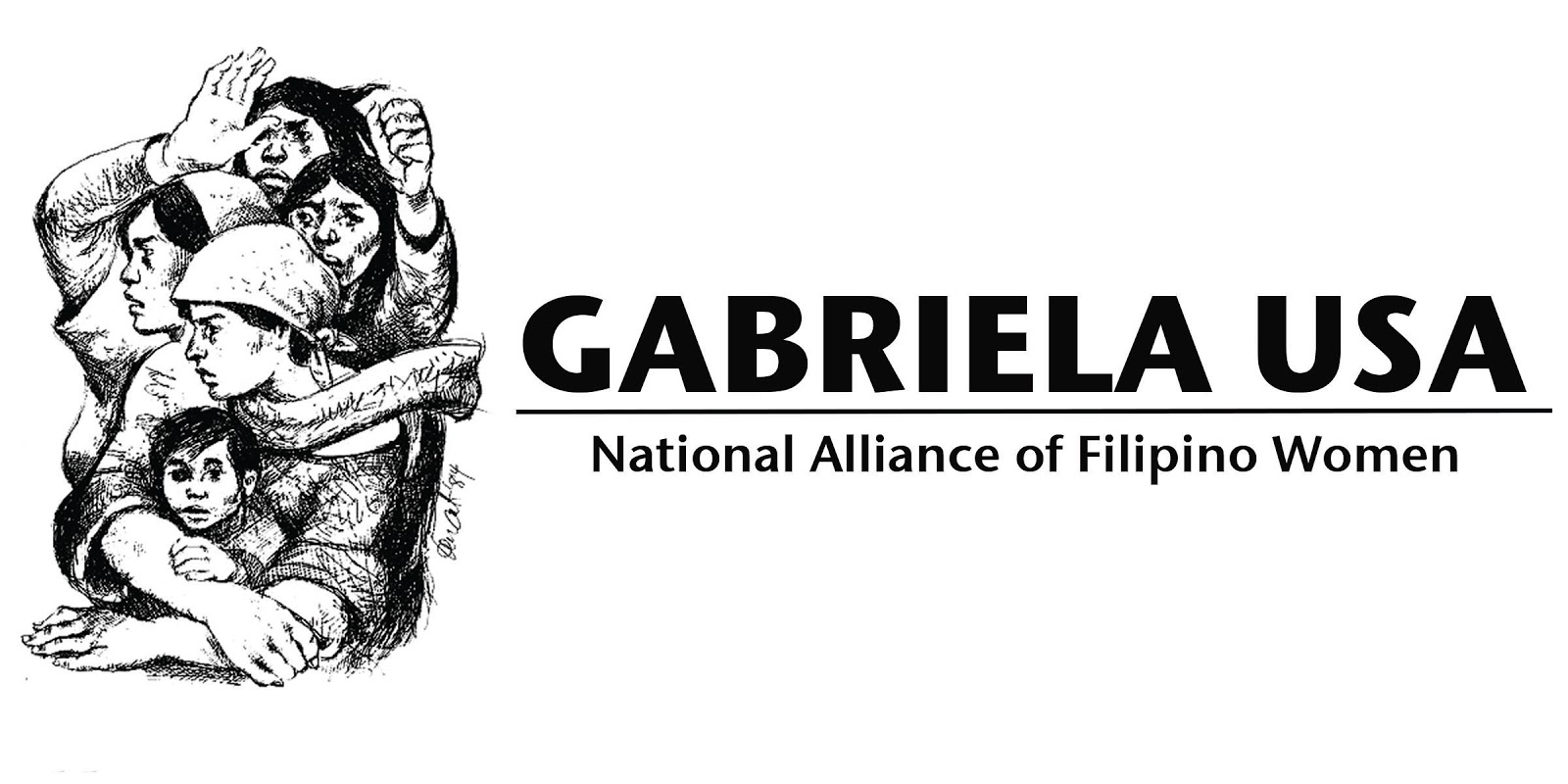 On January 20, 2018 GABRIELA USA, member organization of the International Women’s alliance, and their members joined hundreds of thousands of people across the U.S who took to the streets in protest of U.S. President Trump’s first year in office. In contingents representing working women of color joined by their children, families  and allies marched under the banner “RISE against fascism, RESIST militarization, UNITE for self-determination.” 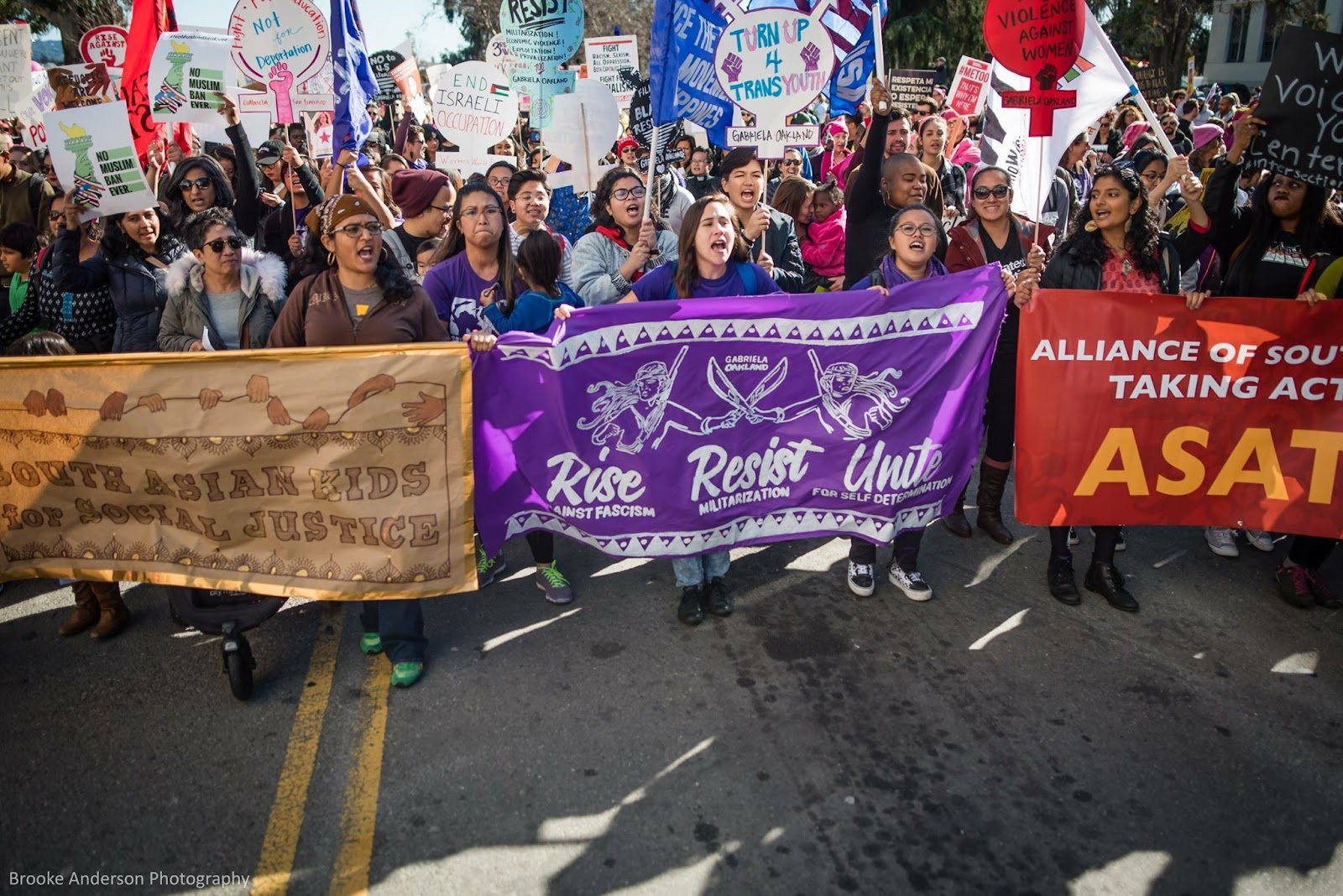 GABRIELA USA and our allies united to fight against Trump and his monopoly capitalist administration that has implemented neoliberal policies this past year that have gravely impacted  the working class. We have witnessed attacks and scapegoating of immigrants, Muslims, Black and brown people, women and children. From the U.S. to the Philippines to Palestine and throughout the globe, we are witnessing the ever-worsening crisis of a global imperialist system. Post Trump’s visit in Asia, it is clear that the U.S- Duterte regime is a fascist regime that is attempting to crush the people’s movement, but the People’s resistance is growing and strong despite the repression and many women are rising up! 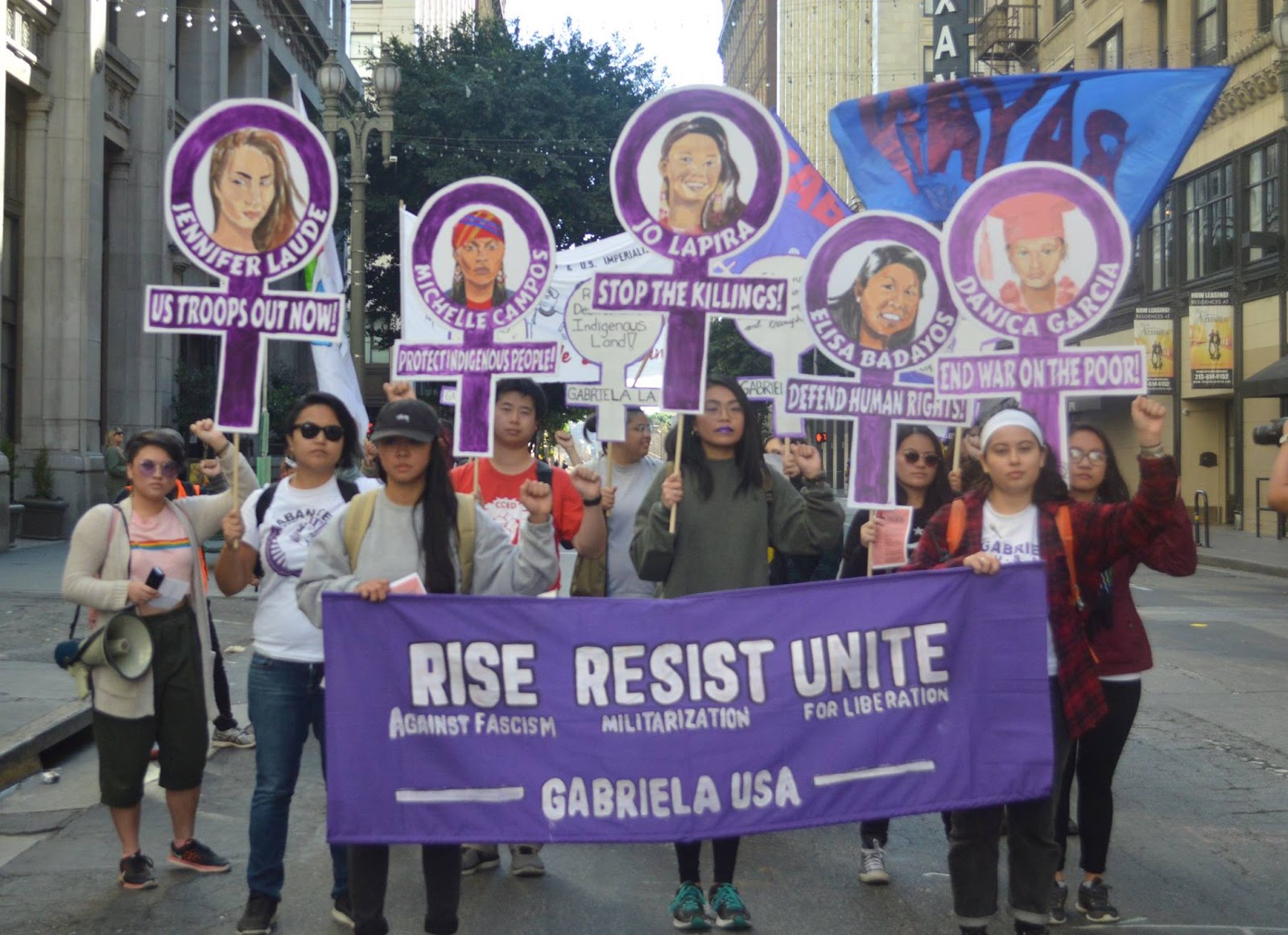 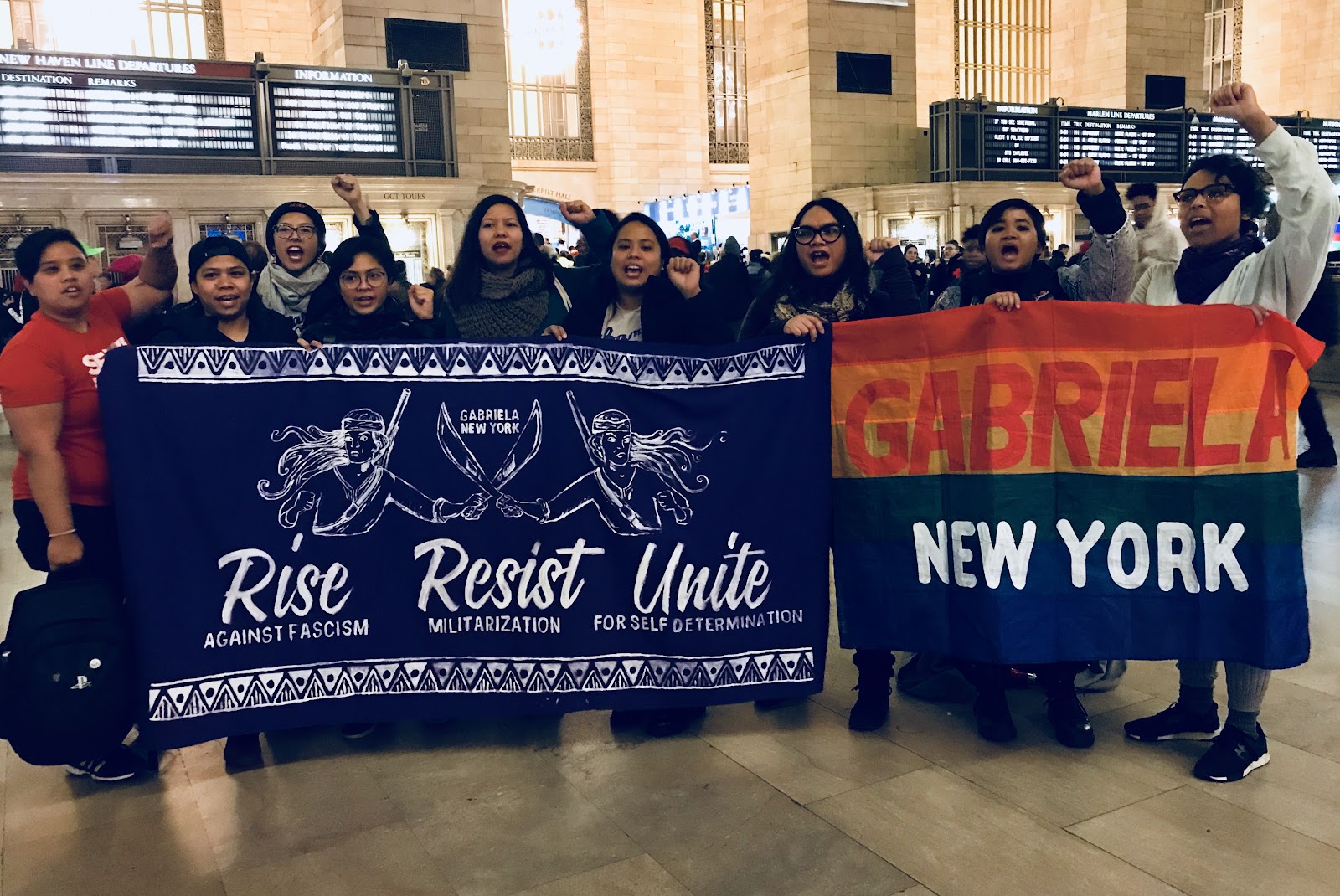 “We must be in solidarity for justice for working women, trans-women, and families of color who are constantly being attacked, harassed, and displaced from their homes in cities across the U.S., for the indigenous women and families being violently pushed off their land in the U.S., in the Philippines, in occupied Palestine and around the globe due to war and militarization. We must uproot the system that oppresses and exploits us. We must build a  women’s movement that fights for the genuine liberation of all oppressed people.” Irma Shauf-Bajar, Chairperson, GABRIELA USA. 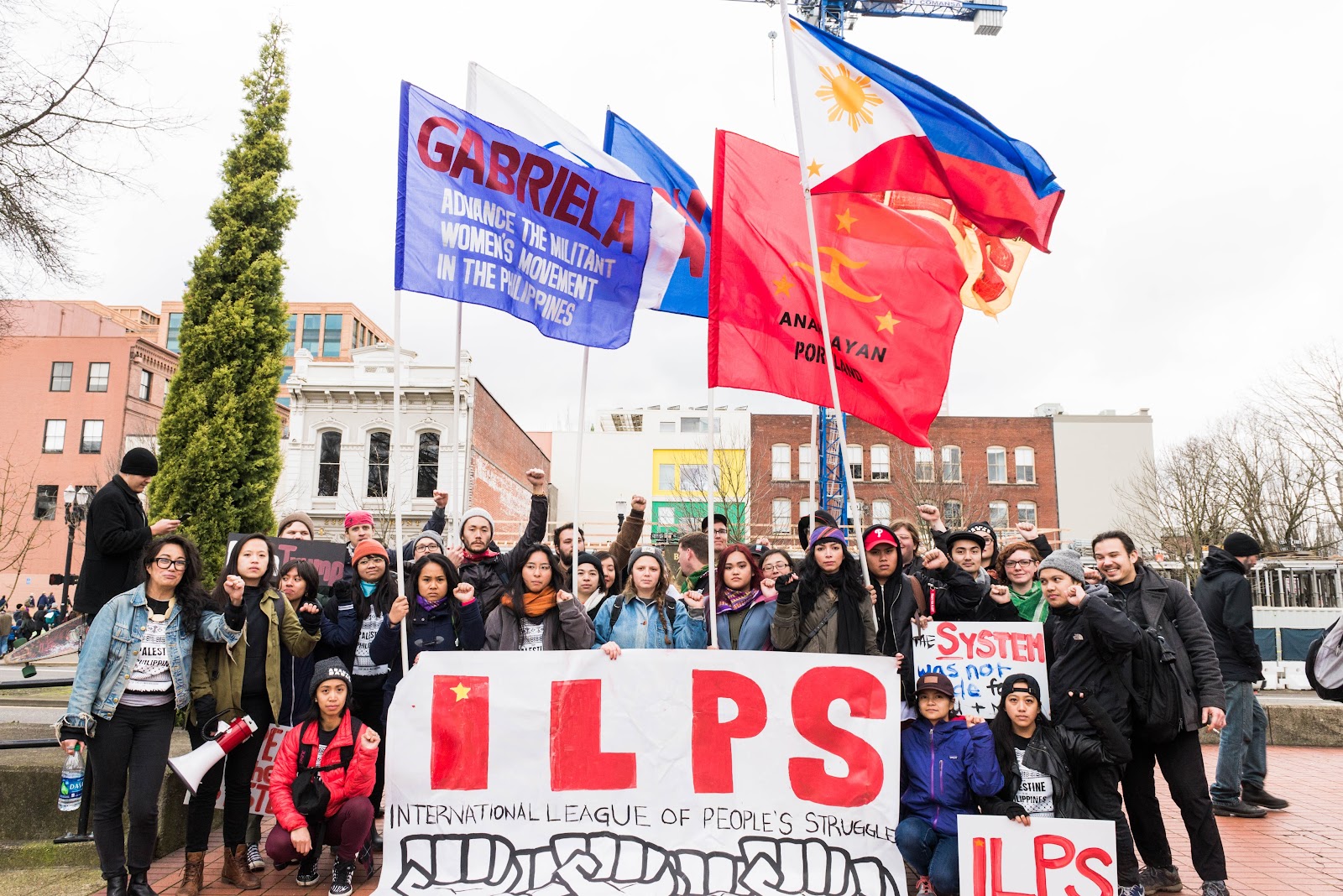 As imperialist interests are increasing in its aggression, working-class women and their families have to bear the costs and impacts of a system that profits from the exploitation of the majority. It is our duty to raise the analysis on the issue of violence against women, expanding it beyond a gender issue, and highlighting the economic, political, and cultural aspects by connecting how imperialism perpetuates and worsens violence against women in all its forms. 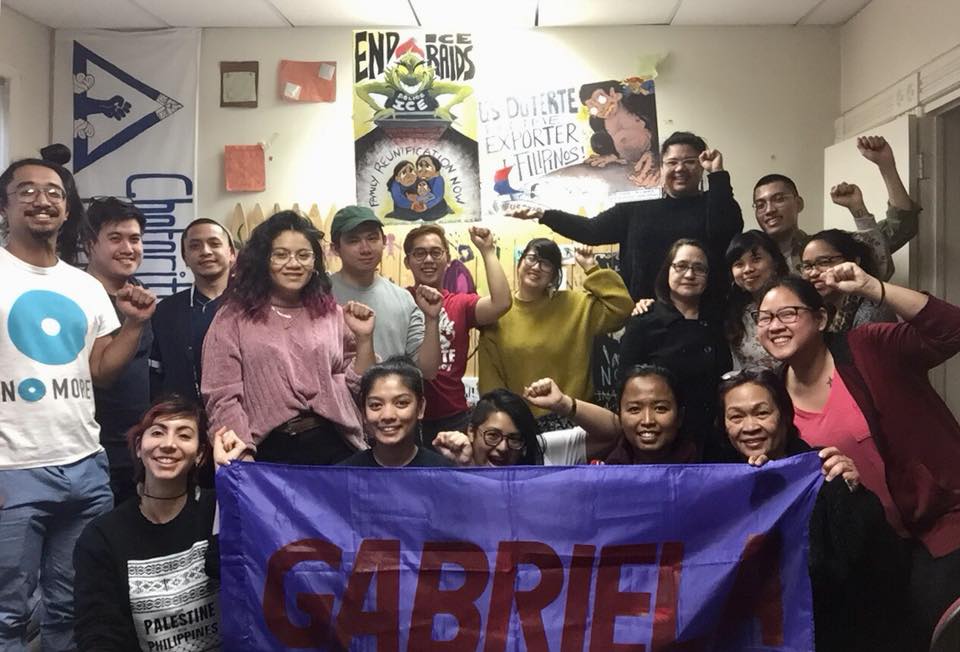 GABRIELA USA urges all people to join us for One Billion Rising as we continue to carry out our  RISE against fascism, RESIST militarization, UNITE for self-determination campaign on February 14th and on March 8th, International Working Women’s Day.

GABRIELA USA is a grassroots-based alliance of progressive Filipino women’s organizations in the United States seeking to wage a struggle for the liberation of all oppressed Filipino women and the rest of our people.

While we vigorously campaign on women-specific issues such as women’s rights, gender discrimination, violence against women and women’s health and reproductive rights, GABRIELA USA also addresses national and international economic and political issues that affects Filipino women.
GABRIELA USA is an overseas chapter of GABRIELA Philippines, and is a member organization of BAYAN USA and the International Women’s Alliance.

IWA Secretariat is based in the Netherlands. For info, write to internationalwomensalliance@gmail.com View more posts