Almost a month after the layoff of more than 2,600 workers in the Philippine Airlines to give way to the contractualization there, women workers held a picket in front of the Labor department (DOLE) to condemn contractualization and call for the scrapping of the employment scheme.

The workers, led by the Kilusang Mayo Uno Women’s Department, carried a blown-up employment contract signed by Pres. Benigno “Noynoy” Aquino III, symbolizing the government’s promotion of contractualization as shown by its support for the employment scheme in PAL. “Workers are united in our stand: contractualization is a bane that should end immediately. It has meant lower wages, no benefits, consistent threat of being laid off from work, and no union rights,” said Nenita “Nitz” Gonzaga, KMU vice-chairperson for women’s affairs. 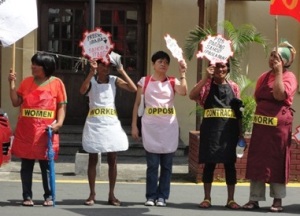 Women contractuals suffer wage cuts and slash on benefits. Maternity benefits are denied them. In many factories, especially in export-processing zones, getting oneself pregnant means being booted out from work,” she added.

KMU Women blamed the Labor Code and the Department of Labor and Employment Order No. 08-02 for the fact that majority of Filipino workers are now contractuals. 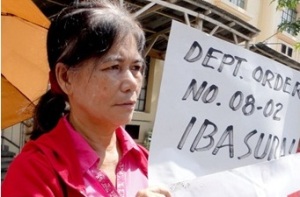 “We are calling for the junking of this anti-worker DOLE Order No. 08-02. It has legalized the extreme exploitation of Filipino workers via contractualization,” Gonzaga said.

“We are also condemning the Aquino government for approving the contractualization via outsourcing scheme in the PAL. That’s bad news for women workers as it could only mean that contractualization will further spread and worsen,” she added.

KMU Women also condemned DOLE Sec. Rosalinda Baldoz for saying that the Keppel Subic Shipyard management did not violate labor standards in the light of the Oct. 7 incident which killed six contractuals. “It’s clear that workers’ lives don’t mean anything for the DOLE and the Aquino government.

The ranks of our country’s workers has become thoroughly contractualized and justice is denied contractuals who die at work,” Gonzaga said. “We are just starting in our campaign against contractualization. We vow to intensify our protests in the coming months,” she added.